Confessions from a Sanctuary 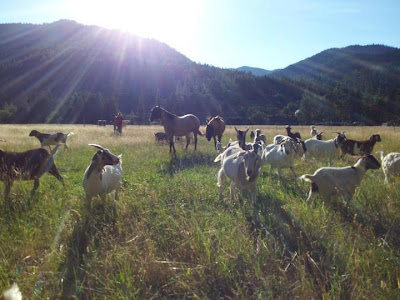 I've never shared impromptu thoughts and feelings on this blog before, but tonight is not like all other nights.

HEALTH originated out of a desire to continue my scholarship and advocacy outside of the university. While in graduate school it then became an outlet for personal research and stuff that wouldn't make it into a philosophy term paper. Presently, I've been out of school for eight months. The main difference between now and then (four years ago) is that I became burnt out between teaching apathetic students, struggling as a grad student, frustrated as a scholar, and devastated as a friend and a domestic partner. After the final brutal semester of grad school, I decided I needed new direction, one that centered around creativity and embodiment.

Six months later, I've completed a two month excursion across the West through nine of the USA's National Parks and several of its most exciting cities. Just a month ago, I arrived at an animal sanctuary whose vision is that of reciprocal healing (whereby "people" heal "animals", the animals heal people, and both heal the land). When I found it in a catalogue, it sounded like a perfect opportunity to learn more about animal care taking, therapy, and an alternative to incarceration etc. Unfortunately, this has not been so much the case. I'm going to bite my tongue on this topic and instead share something I've experienced that is much more profound and unsettling.

I. Moral Monsters
If you're on the listserve or email trail of some large animal nonprofit, you are well exposed to brutal narratives of animal cruelty. Upon seeing people kick and torment the animals, one is instantaneously engulfed in moral outrage and perhaps tears: "Those sick monsters! Those evil fuckers are going to hell! They deserve to be treated just like they've treated those poor, innocent animals!" These are just some of the reactions I've seen posted  in response to new investigative footage. For a compassionate and righteous person, these attitudes are expressed effortlessly; one must exercise willpower to hold them back.

Those bearing witness are wounded by these recorded testimonies. The trauma they experience is utter powerlessness. The powerlessness and woundedness they experience are their exposure to a will-less identification with the animal others. What makes these narratives so traumatic is the lack of mercy for those perceived as having so little power. Humans have so much power, the animals have so little, and what an injustice it is to see the abuse of human power over animal innocence.

As much as people generally identify with the animals undergoing abuse, few identify with the perpetrators of the violence. Although the purpose of these videos is to evoke empathy for the animals and consequentially political action on their behalf, the disturbing truth is that those committing the injustices are human, those bearing witness are human, and those bearing witness are often financially supporting the companies that employ these "monsters." To realize this would perhaps be another trauma, one that would move one who cared generally down one of two paths: to recognize one's participation and become veg*n or to experience intense cognitive dissonance and convince oneself that everything will be better once one of these monsters is behind bars.

Neither witness, however, is likely to place themselves in that worker's circumstance and potentially risk confronting a terrifying truth about their own nature. I would (hesitantly) agree that many of the folks in these videos who practice the most wanton cruelty are moral outliers in our society. A recent study by Amy Fitzgerald concluded that of all industrial workplaces, packing plants had the greatest rates of crimes per capita in their communities. Fitzgerald speculated her finding is based on the kind of desensitizing work of the slaughterhouse and/or the type of people who are attracted and willing to work there. Regardless, in no way should environmental conditions or personality type excuse such behavior and guard people from responsibility.

It's difficult imagining myself--an 8-year anti-speciesist from an affluent suburban background with a graduate degree--as one of these animal abusers. With all the sympathy I have for animal others, with all the theory I have learned, without any history in domestic (animal) abuse, and with experience at animal sanctuaries, identifying with these detested human beings would be a stretch. At least, so I thought until recently.