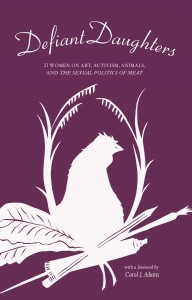 One year ago, in recognition of a turn in animal theory over the last several years I created a post called "Animal Theory, Going Feral in 2012." The most exciting trend included advocating for animal others from critical (Critical Theory and Animal Liberation), ecofeminist (Social Lives with Animals), and citizenship theory (Zoopolis) as matters of interspecies justice in contrast to moral rights. In addition, a collection of more nuanced explorations of the ethics of human-animal relations (Animal Kind, Beyond Animal Rights, Animals in Context) as well as an unprecedented piece on plant ethics (Plants as Persons) joined the ranks of the rigorous, groundbreaking classics (Animal Liberation, Case for Animal Rights), but arguably outdated, abstract approaches.

Innovative explorations and comprehensive presentations of human-animal relations are still a comin'. The last half of 2012 and the first half of 2013 may prove to be just as rewarding as the last few. I'm particularly excited about Margo DeMello's Animals and Society, which from a glance over the table of contents seems to map a brilliant trajectory for thinking through the history, social context, and ethics of human-animal relations. Another well-welcomed book is Ryan Hedinger's Animals and War, which touches on a much neglected subject in critical animal studies: the fraternal [sic] participation and subjection of animals as agents in human warfare. Likewise, Juliet Clutton-Brock's Animals as Domesticates seems like refreshing and comprehensive examination of the history of domestication which dos not reduce animals to the role of hapless object in the popular narrative of monolithic human domination favored by advocates and adversaries of animal rights.

In addition, several books explore the construction of the modern human subject and contemporary political systems through the non-criminal violence against animal others and biopolitics of demarcating who is a proper (human) political subject. In Animalia Americana, Colleen Glenney Bogg's tracks the construction of humanity throughout American history from bestiality trials to slave narratives to contemporary feminist theory. Karl Steel's How to Make a Human excavates the violent making of "humanity" in Medieval Europe in contrast to the larger body of literature on the emergence of "humanity" in Ancient Greece and Modern England and France. There is also Cary Wolfe's work, Before the Law, which ought to attract the attention of those interested in continental political theory. And before one assumes deconstructing the border between human and animal is sufficient, consider checking out two more books dedicated to the value of plants, from Daniel Chamovitz's fascinating presentation of plant abilities in What a Plant Knows to Michael Marder's challenging Plant-Thinking.

After so many years mucking through dense theory that doesn't offer itself to political action, I'm enthusiastic for upcoming contributions on tying lived experience with animal advocacy. More than any other animal book this year, I'm highly anticipating Defiant Daughters. The book, edited by Kara Davis and Wendy Lee, focuses on a diversity of women's relationship with a diversity of animal others, including those of queers, differently abled women, and women of color. Norm Phelp's e-book, Changing the Game, genuinely addresses the inherent challenges (and differences) of advocating on behalf of animal others as well as "the rising economic, political, and cultural power of nations such as China, India, and Brazil." Finally, if you missed it, Nick Cooney's Change of Heart might be well worth a read for its presentation of empirical evidence on how to be an effective agent for change.

If you are interested in contributing a book summary and review to be posted on this blog or in the Journal for Critical Animal Studies, please send an email or comment below.